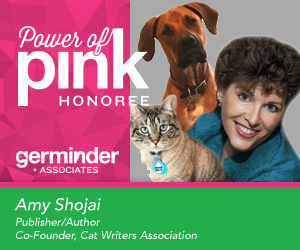 Amy Shojai is the 11th Germinder20 Power of Pink Honoree from Germinder + Associates. Along with being one of the Cat Writers Association’s co-founders, Shojai is a respected pet expert, author, publisher and animal lover.

Germinder + Associates provides communications services for the pet/vet sectors and other niche industries. Germinder20 Power of Pink was announced in January 2018 as part of the celebration of Germinder’s 20th Anniversary. Germinder20 Power of Pink Honorees can designate a $1,000 donation to a non profit organization. This donation is made in the honoree’s name through Germinder’s 20th Anniversary Fund Giving Back program. Amy chose CWA to receive the donation.

Shojai’s many accomplishments include being an award-winning author of more than 30 pet care books, writer of over 2,000 articles and columns, and creator of the Thrillers With Bite fiction series. Her latest project is her “Write Schtuff Coaching Series,” in which she lets her mentor side shine. It includes live coaching calls and on-demand replays that help writers get their books done, published, and marketed.

“I am honored to be among the stellar group of individuals singled out by Germinder + Associates,” said Shojai. “This recognition means even more, coming from Lea-Ann, a professional who has taught me so much over the years about professionalism, collaboration, and putting passion to work. I not only admire her as a colleague, but I treasure our friendship.”

Lea-Ann Germinder, founder and president of Germinder + Associates, Inc., and Shojai first met during the CWA conference in Kansas City in 1998. When Germinder launched Goodnewsforpets.com that year, Shojai enthusiastically signed CWA as its first media sponsor. Since then, they have collaborated on many other projects and ways to promote CWA sponsors and members.

“I’m so thrilled to announce Amy Shojai as the 11th Honoree,” says Germinder. “She is the best of collaborators. Now we get to celebrate her — the launch of her Write Schtuff Coaching webinar series, honor her mentoring and coaching of writers through the years, and celebrate again her co-founding of CWA with the 25th Anniversary of the CWA Banquet and Conference in St. Louis next year.”