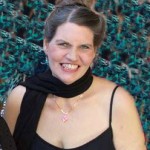 Yesterday humanity was diminished by the passing of Dr. Lorie A. Huston, friend, ailurophile, veterinarian, writer, blogger, social media expert and one of the kindest people ever.

I met Lorie at a CWA conference in Westchester, NY, and we visited occasionally at veterinary social media conventions. I was struck by her gentle demeanor, her intelligence and her subtle but quick wit.

When she agreed to take the reins of CWA I was thrilled. And for almost a year she guided our organization through a difficult transitional period. Over the last 11 months Lorie and I became good friends. 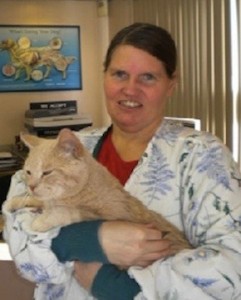 On several occasions I offered to buy her a glass of wine. She always declined. She eventually shared that she had struggled with liver issues her entire life. Earlier this year she had a close call. Despite her more frequent and severe hepatic bouts, she never sought a liver transplant because of the lifelong complications.

Lorie called me two weeks ago to remind me that she was visiting family in Nebraska. She promised she’d be available by cell phone or email if I needed her. She’d be back in a week.

That was our last conversation.

I learned later, the day she left for Nebraska, her skin was orange. She assured coworkers that everything was under control. Apparently it wasn’t. 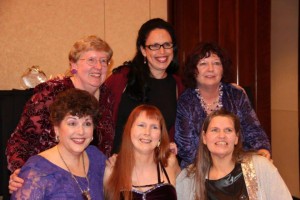 Lorie always responded to phone calls. Always. When she failed to return calls or answer emails, I became concerned. Finally, CWA newsletter editor Karen Payne reached her. She told Karen she was in ICU in Nebraska.

I tried calling and emailing many times to check on her, to no avail. On Monday, that little voice of mine told me to hunt down her vet clinic. I spoke to Tia, the receptionist. Fortunately, she knew I was a friend and told me Lorie was on life support. The prognosis was “poor.” Tia was also awaiting the arrival of Lorie’s house keys so she could check on Lorie’s six cats. Since Lorie only expected to be gone a week, she had set out two weeks rations of cat food and water.

I received another call from Tia. I thought the news would be about Lorie’s cats. It wasn’t. Tia struggled to tell me that Lorie had just passed away.

At approximately 04:25, September 30, Lorie A. Huston joined her many pets at the Rainbow Bridge. Heaven may be a happier place, but Earth feels empty. 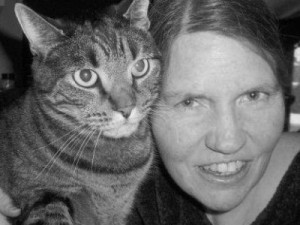 Lorie’s family has asked for help rehoming the cats. The clinic is too small to house them and it’s a hardship on Tia (who is recovering from a serious dog attack) to care for the pets. We are working on obtaining details and photos of the kitties. People have offered donations for shipping and boarding. Let me know if you are willing to adopt, foster, transport, monitor or donate money. I’ll let you know when and if funds are actually needed. 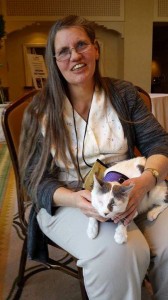 Now a little bit about Lorie. She is survived by her six “beautiful” (her words) kitties, her brother Tim, her sister-in-law Karen. I don’t know about her parents. She lived near Providence, Rhode Island. All of her cats were either rescued or had been abandoned at her clinic.

Lorie attended the Iowa State University College of Veterinary Medicine, graduating in 1986 as a Doctor of Veterinary Medicine. Prior to that, she attended the University of Nebraska, where she received a Bachelor of Science. In 1988, she moved to Rhode Island to work full-time as a veterinarian at the Hoffman Animal Hospital in Providence. Caring for primarily for cats and dogs, she was responsible for most of the surgical procedures, which according to Lorie surgery was her favorite part of the business day. She also cared for sick animals and provided routine preventive health care. 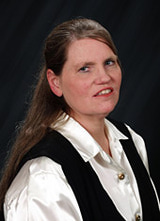 Several years ago, Lorie saw a need for more accurate online pet care information. As a result, she started writing and blogging including her award-winning personal blog, Pet Health Care Gazette. Lorie’s articles have been widely published both offline and online, and can be found in FIDOFriendly, Pet Sitter’s World, and many others. Her interest in social media and search engine optimization sprang up as a natural extension of her online writing. She was a reporter for National Pet Health Examiner, host of Animal Cafe. She was a certified veterinary journalist and wrote a regular column for PetMD.com and assisted CATalyst Council with their social media outreach to promote the status of cats as pets. 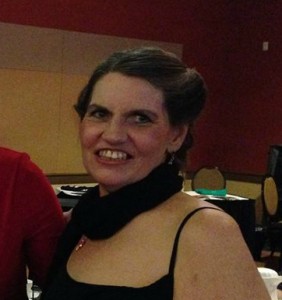 In November, 2013 CWA members elected her president. Because of her desire to share accurate information, she freely gave interviews to fellow pet writers.

Recently, when I was working on a very technical article, she sent me links to articles that helped clarify the complicated topic. She even offered to fact check the article before I submitted it to the publisher. Thank you, Lorie. I really appreciated that. So many writers and befitted from her wisdom and her intellectual generosity.

Her Pet Health Care Gazette won the 2012 Petties Award for Best Pet Blog as well as the Winn Feline Foundation prestigious 2014 Media Appreciation Award. She was a 2014 finalist for the Pet Industry Woman of the Year.

Lorie, we miss you. We cat writers will continue your crusade to improve the quality of life for pets and their people. Rest in peace, dear friend.